This site has been developed to be a repository and guardian for the resources and knowledge as it relates to Waka Wairua: Landscape heritage and the creative potential of Māori communities. Maraeatea is the culmination of work by a team of researchers, academics and oral historians from the James Henare Māori Research Centre at the University of Auckland, The Otago University, Heritage New Zealand and the private sector.

Founding traditions ‘concern marriage, birth and residence; they establish relations between hapū [kin groups] with respect to land’, he wrote (1988, p.200). Certainly this description may apply elsewhere in Northland and Aotearoa more generally.

There is another dimension of founding narratives that we want to talk about: the voyaging waka (vessels). These kōrero (stories) concern entrepreneurial leadership, discovery and expansion.

We focus on the ideas of early exploration and expansion in this website.

It might be argued that research, therefore, into early waka narratives has already been done and little, or nothing, new can be learnt. We argue to the contrary. 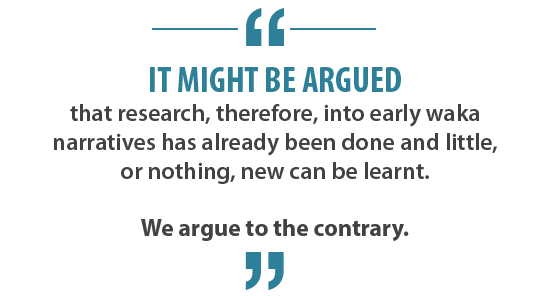 We re-examine selected waka narratives to demonstrate that the early Polynesian entrepreneurs’ expansion and exploration in Aotearoa from Pacific homelands are much greater than previously acknowledged. Nineteenth century ‘historians’ (such as Percy-Smith, White, Grey and others) often cast their own perspectives and interpretations on stories that they gathered to fit their theories about from where Māori came and when they came to Aotearoa.

As M. P. K. Sorrenson wrote (in 1979), over time Pākehā ‘myths’ accumulated about Māori origins. Standardized and static perspectives on history emerged from these written texts.  They often glossed over (and generalized) the complexities of whakapapa-framed narratives that describe who came to Aotearoa, where they went, what they saw, who they met, why they moved from place to place, the relationships between people, the resources they brought and so on.

Non-Māori writers were also generally writing for a non-Māori audience (for example, papers delivered to the Auckland Institute and Museum and the Journal of the Polynesian Society), if not also attempting to ‘preserve’ stories before they die out, along with Māori who were also consigned to a similar fate.

Another problem can be seen in the so-called ‘recording’ of accounts provided by Māori: the very people who gave the narratives are not acknowledged (or are minimally acknowledged), and neither is their perspective or reason for giving their kōrero, what connection the story has to them or to their marae or their hapū.

John White is an example who ‘took’ Māori stories with little or no acknowledgement of source. A lack of context and a selected extraction of kōrero by these historians or ‘amateur ethnographers’ as they have been called, skews and obscures the original narrative and interpretation, and diminishes their meaning.

Above all, a loss of context, a loss of kaikōrero or narrator identity is also a loss of mana or authority of the narrative.

The following were selected for further reading: